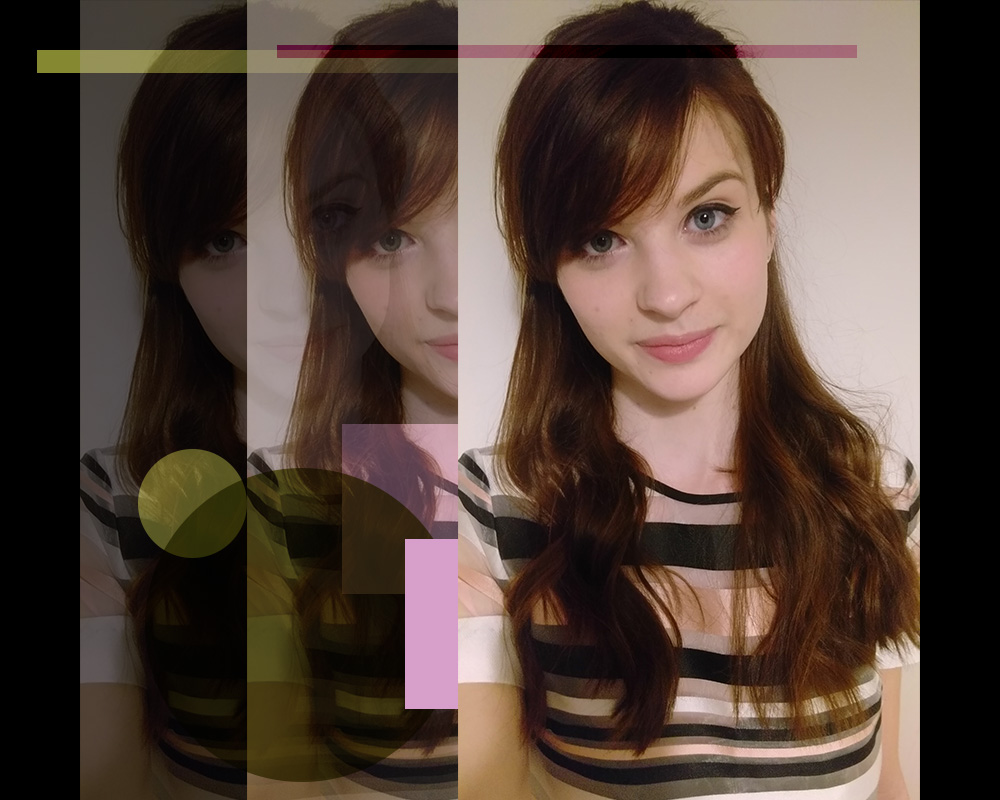 Hanna Ardehn is the kind of actress who captivates you first with her beauty, flawed and real and raw, and then keeps you with her talent, subtle, yet strong; undeniable.

I first saw Hanna on the Swedish TV series, 30 Degrees in February, streaming on Netflix. Hanna has one of the leading roles, Joy, a young Swedish girl who moves to Thailand with her mother and younger sister in an effort to heal her mother, who suffers from anxiety-induced strokes.

Hanna embodies Joy’s character with the kind of severity that gives the audience the impression that this could be Ardehn herself, and in the process, you sort of fall in love with both of them. She’s beautiful, in the most natural way, not perfect, not intimidating, beautiful in a more wholesome realm, that honors herself and the eyes that witness her; almost like seeing a deer in the woods. She calls an attention from the audience, without force or volume, a subtle pull that gives each of her characters a presence hard to overlook.

Ardehn grew up just outside of Stockholm with her mother and two sisters. She currently resides in Linköping, where she studies Psychology at the local university. Hanna and I conducted this interview over email.

Hey, Hanna. How are you?

I’m excellent! It’s spring here in Sweden so the light is finally coming back.

What kind of music do you like? Any favorite musicians at the moment?

I like a lot. I’ve listened to very different kinds of music throughout the years. Before, I listened a lot to metal and punk pop, like Marilyn Manson, Rise Against, Panic! At The Disco and My Chemical Romance. Now I’m more drawn to calm indie music, like Keaton Henson, Ben Howard and Little May. Two favorite songs at the moment are ‘Gun’ with Mas Ysa and ‘Blue Blood’ by Laurel.

You mentioned playing in a theater group as early as age six. Is this where your acting career began? At what point did you realize you wanted to become an actress?

I’d say the theater group was more just for fun. It was all about letting us kids improvise and create our own small plays to show to our parents. I didn’t really start acting more seriously until I was 9 ,when I went to my first auditions. I don’t really remember when I fist knew that I wanted to act. It’s always just been a thing that I liked to do. I remember my mom telling me I used to stand in front of the mirror, when I was around 2 or 3, and pretend to be the evil queen from Snow White, reciting “Mirror mirror on the wall”. She also told me that I also practiced using bad words when I thought no one could hear me.

Can you tell me about your journey from theater group, to being cast in the award-winning television series, 30 Degrees In February? Who were your biggest supporters in this process?

My biggest supporters have always been my family. My mom and dad have always come to every one of my plays, no matter how bad they were. My dad was the one who first suggested that I should try going to auditions for movies. He found two websites where actors uploaded their profiles and signed me up. Later, I went to different auditions that were advertised on the sites. When I was ten-years-old, I got the part in This Is Our Kids. After having acted in a movie, I was really inspired to act more. I went to more auditions and got small parts here and there, meeting different casting directors. When I was fourteen, I got a main part in Dubble Life, a series for young adults, and soon after, I got asked by one of the casting directors that I’d met before if I wanted to go to an audition for 30 Degrees in February. I had to go to several auditions for the part before I got it. I thought I was dreaming when I got the part. I didn’t really realize I had gotten it until a week into filming. Four years later, I got to meet everyone again and shoot the second season.

Does it feel surreal to be scoring these roles?  Do you watch the productions you’re in? If so, what’s that like?

It is very surreal and strange to think about. When I was younger, I never really thought about the fact that others would watch what I did, I just did it for fun. It is still strange to think that people I don’t know, and even more people that I do know, watch me act. I get a little embarrassed when people comment about it. I don’t really like watching myself. I have watched the series mostly to see the other actors. Watching myself is like hearing a recording of your own voice, but worse. I am a bit critical of myself so I just pick apart all the things I think look weird. But I guess we’re all a bit critical of ourselves.

What roles would you like to see yourself taking in the future? Why?

I’d like to do some things with action. I think I would like the physical part of it. I would also like to do something where I am a villain, or just a dark character. One of my favorite movies is Silence of the Lambs and Anthony Hopkins portrayal of Dr Lecter is so intriguing. I have always liked thrillers and dark characters, and to explore that would be amazing.

You did an amazing job embodying your role as Joy- a strikingly beautiful, silently strong, innately innocent teenager, emotionally supporting her ill mother, and younger sister, in 30 Degrees In February. In what ways do you relate to Joy, if at all?

Thank you. I don’t really know how I’m like her. I look like her at least. I would like to think that I am as enduring and headstrong as her. I am more careful in what I do and I would never run away like she does. I admire her, but I don’t always agree with what she is doing.

Who do you look up to in your field? Who are your favorite directors/producers, actors/actresses? Who would you like to see yourself working with in the future?

There are so many incredible people that I’ve worked with, and I truly admire them all. I have learned so much from them. Maria Lundqvist, who played my mother, is amazing, both as a person and as an actress. She is warm, caring and knows what she wants. I also admire Cate Blanchett, Meryl Streep, George Clooney and many more. I don’t know any specific person I would like to work with. Every actor and director I can think of would be wonderful. If I’d have to pick one I’d say Anthony Hopkins since I especially like one of the characters he’s played.

What are some of your favorite movies? Which European films can you recommend to the American public?

Oh, I’ve watched so many films. I do love some dark comedies like Death At A Funeral, In Bruges and 7 Psychopaths. As I mentioned before, Silence Of The Lambs is a big favorite. As for European films, I would recommend french films like Amelie de Montmartre and Intuchables since they often have a unique way of telling a story. I would also recommend some Swedish comedies like The Hundred Year Old Man Who Climbed Out The Window And Disappeared, In Bed With Santa and A Man Called Ove.

What are your other passions aside from acting? (I’ve seen some of your drawings on Instagram; they are really nice.)

I like creative outlets most, like sewing, knitting and drawing. I like the therapeutic aspect of being creative, and the way you get to make something tangible in the process. If I’m stressed, I just sit down and draw something. It doesn’t always turn out the way I want, but there’s a pleasure in just letting your pencil glide over the paper. I also like writing. It’s a good way to get rid of the clutter of thoughts that sometimes arise in my mind. When I write, I often draw things around the text, and let the words be a part of a picture. I constantly listen to music when I’m alone, and I often let it reflect my mood or affect what I draw or write.

For me, everyone is beautiful in their own way. There is the beauty in looks, and then there is the beauty in personality. Strength is also quite varied. There are people who can do absolutely everything, and never back down from a challenge. There are also people who might seem fragile, but fight their own demons and battles that you might not see, and that, for me, also shows enormous strength. I am amazed by women like my sister, mother and grandmother, who, no matter what life throws at them, always keep moving on. They are full of life and energy, and always have new ideas. I find that very beautiful. Strength and beauty for me are often intertwined, since I find strength beautiful and I usually find strength in most women. The idea of a woman is beautiful to me. They are beautiful to draw, and they are beautiful in their strength. Just the fact that they can grow and carry a life inside of them is pretty amazing. I hope that gives some kind of an answer to your question.

Any movies currently in the making? Where would you like to see yourself in five years?

At the moment I’m not making anything. I am studying psychology, and mostly focusing on that. Something might come my way, but you never know. In five years I will probably have my psychology degree, and I might have shot some movies, short films or another series. I would love to be able to act and study at the same time, but if a great offer comes along, I think I could take a year off of university, and then come back to continue my studies.

Is there anything that I didn’t ask you in this interview that you wished I had? If so, would you please elaborate?

A great book tip is Shadow Of The Wind by Carlos Ruiz Zafón, and frozen grapes and watermelon are my favorite snacks.

You can watch both seasons of 30 Degrees In February on Netflix, and discover the force de Ardehn for yourself.  Hanna can also be found on Instagram @hannaardehn.